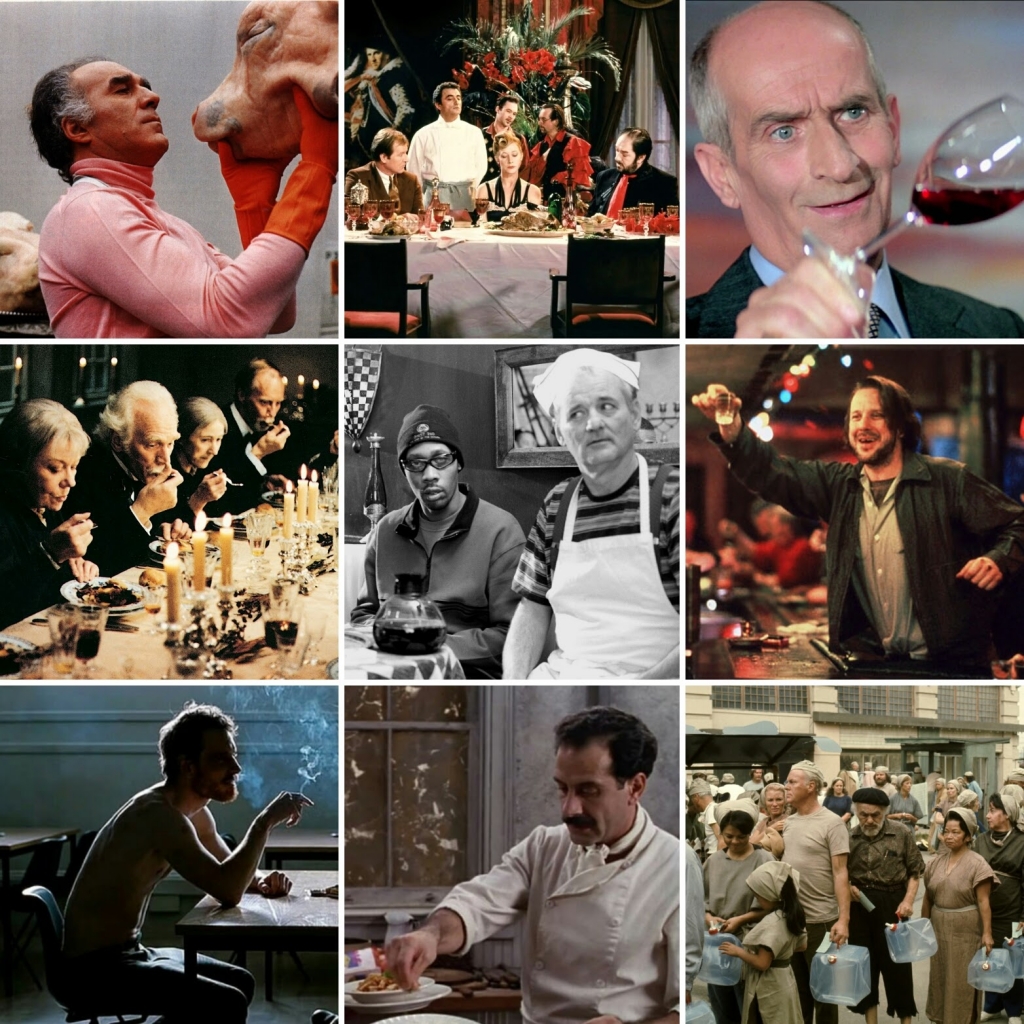 You won’t find Julie and Julia here. Not that I have anything against it – aside from the fact that everybody already knows this film. Below you can find (I hope) a little less obvious list of exceptional movies about food. Since it’s my habit to judge things, I have prepared a unique, Poznan-related foodie scale – especially for Mytujemy. So, here is my top ten, bon appétit!

Obscene, perverted, immoral, decadent, vulgar. La grande bouffe is my first and strongest association with the “movie about food” category. Four tired with life middle-aged men decide to commit suicide by overeating. They hide in a villa and organize an orgy with huge amounts of food and drink, three prostitutes and accidentally met teacher. The film can be understood as a satire on nihilistic consumer society, criticism of the leisure class, a metaphor for the fear of impotence or any different way. Nevertheless La grande bouffe is one of a kind and will still shock you, even forty years later. Only one thing is unclear – whether more people became hungry or skipped a meal after watching this movie.

Rating: satiating as a (lifetime) burgers’ delivery from Fat Bob

If La grande bouffe could have a twofold effect, with Fed up there will be no doubt. It is time to think about your life, especially when it comes to eating habits. This document shows the blatant “oversights” (AKA “legal gaps lobbied by the sugar industry”) in the food policy of the United States. Between the numerous animated infographics and talking heads you will learn about the epidemic of obesity and other health problems affecting American children. As a result, you will never again ignore “sugar” value on the nutritional facts label. Or at least you will immediately ride your bike to the store and buy some fruit and vegetables, as I did.

In the time of Instagram few will be brave enough to say that the food is meant only to satisfy hunger. But as it turns out, 150 years ago there were some places on earth, where people thought exactly that. One of such places was a tiny village on the coast of Jutland, where a pastor raised two beautiful daughters on extreme puritanical principles. When many years later a French maid Babette starts living with them (and cooking for them), she also adopts these rules. However, at some point she decides to repay her employers by setting out a great feast for them, instead of the usual bread soup. This sudden hedonistic gap in the life of pious (even though not immaculate) community will have quite unexpected consequences. A unique, idyllic climate of Babette’s Feast will maybe cause a longing for a simple life, simple food and (perhaps not such) simple dilemmas.

Rating: simple and good as a two-course lunch at the Owacja Slow by Rynek Jeżycki

Who did not watch movies with Louis de Funès in her/his childhood… should soon catch up! But this comedy classic is worth refreshing not only because of the childhood nostalgia. Claude Zidi’s movie is a surprisingly up-to-date (especially in the time of CETA and TTIP) protest against a massive expansion of junk food. Megastore approach to food (represented here by a chicken produced from bones and an unidentified mass in a beautiful camp “food factory”) is opposed not by criticism of culinary critique snobbery, but by the authenticity and passion of food preparation and of course reliability in their assessment. It is not a cinema of moral anxiety, but it is still worth seeing L’aile ou la cuisse even for this one scene where the character played by Louis de Funès meticulously analyzes wine and recognizes it only by means of visual sensations. And, of course, for the sheer pleasure of watching the most famous French comedian in action.

Although my first association with “a movie about the food” was La grande bouffe, but if I had to choose only one such film to watch, it would certainly be Big night. The simple story of two brothers, Italian immigrants who came to the United States to set up a restaurant and achieve success. The older one, Primo, is an outstanding cook, but artistry in the kitchen is not enough – the business burden of running a restaurant falls on shoulders of younger one, Secondo. The film is a real treat for the senses and the mind – the pleasant soundtrack, witty dialogues and excellent performances (especially by Stanley Tucci, Tony Shalhoub and Ian Holm) and visually tasty climax – the title “big night”, a night of great opportunity. And if you like Italian food without health compromises, then you will surely add Primo’s spectacular dish to your wishlist… What is this dish? That would be a spoiler!

Rating: rewarding as aforementioned main course (BTW, have anyone heard about the restaurant in Poznan which serves this delicacy? Let me know and I will go there immediately, even at 3 am!)

While cigarettes have surely long been out of fashion, certainly there are still those among us who consider a combination of caffeine and nicotine a synonym for breakfast or dessert; in any case they consider it a full meal. Similarly, one can consider Jim Jarmusch’s anthology of short black-and-white episodes a full movie. In 11 segments, filled with various movie stars, we will hear very different stories connected mostly by the very fact of sitting at one table. Despite all possible differences and in spite of all past misunderstanding – the characters face each other and talk. This unifying social aspect of eating is very important, it is therefore worth refreshing Coffee and cigarettes – and remembering that you can always at least try to get along.

Rating: intense as a Brisman or Piece of cake coffee

If you don’t want to go mad after such a huge portion of films about food – even if we took a break for coffee and a cigarette – you should have solid drink! And there is no better film pretext to take up a glass than Barfly based on a Charles Bukowski’s screenplay. And if this doesn’t convince you – perhaps crazy Mickey Rourke as the titular barfly will; Henry Chinaski (Bukowski’s known alter ego), embarks on a wild drunken odyssey on the outskirts of Los Angeles. Perhaps the more appropriate mythological comparison would be “adventures” of Sisyphus, because although on the way we will encounter complex alcohol-romantic dilemmas and maybe even a decent brawl, it all begins and ends at the bar. Therefore, let’s not dwell on this too long, let’s watch Barfly, raise our glasses and shout out: “Heeeey, to all my friends, heeey!”.

Rating: crazy as a Meskal (RIP) party at the bar (and sometimes even behind the bar) until dawn!

If apart from the movies, you also love the Renaissance or Baroque painting, you probably already know of the Peter Greenaway’s work. But if by some miracle you are not yet familiar with it, The Cook, the Thief, His Wife & Her Lover will be certainly a powerful experience. Do not be fooled by the scenography, sensual music and delicious daily menus at the “Le Hollandais” restaurant – behind all this lies perhaps the most controversial film from this extraordinary director. We learn about it the hard way already in the first minutes, when we first meet the Thief (Michael Gambon), probably one of the least pleasant characters in cinema history. However it is the wife (Helen Mirren), placed between Eros and Thanatos, gives the Greenaway’s work true dynamics. I cannot fill everything in here, but let’s just say that the combination of director’s sensivity with great acting, brilliant scenography, mesmerizing  Michael Nyman’s music and costumes by Jean-Paul Gaultier creates a truly unique moving picture. A picture which climaxes in (what else) the spectacular and tragic final dish.

Rating: dangerous as the night Wilda-Łazarz walk in search of some food

Welcome to year 2022. Since the seventies nothing has really changed, aside from the fact that now there are slightly more of us on the planet and we’re almost out of food (ok, there is another subtle change – sponsoring is now a widely accepted practice, and the sponsored girls are called… “furniture”). The darkest climatologists’ prophecies came true, the world plunged into chaos, and the earth started dying. On this gloomy background unfolds an intrigue, which will lead protagonist (typical cop – harsh, but with a heart of gold) to a shocking discovery. Well… Soylent Green is probably the weakest film on this list, I would recommend it only to the most hardcore science fiction fans. But I could not imagine not writing about it here – just as I could not imagine a diet filled only with nutritional substitutes.

Rating: risky as shopping on www.soylent.com (although they will not deliver to Poznan, so you need to find some substitutes for those substitutes)

While La grande bouffe is a fictional story of a hedonistic death  from overeating whim, Hunger, as the title suggests, is exactly the opposite. This intimate historical drama, debut feature film by Steve McQueen, is about the Irish hunger strike in 1981. IRA activists imprisoned for their terrorist activities demanded being recognised as the political prisoners and distinguished from ordinary criminals, if only by allowing them to wear their own clothes. A central theme in the film is not, after all, politics. By individual story of Bobby Sands (Michael Fassbender), shown with remarkable visual intensity, we it means exactly to sacrifice one’s life by refusing to eat. Steve McQueen shows us the strength of the humaneness, which is willing to give such an extraordinary symbolic power to a physiological function of satisfying hunger.

Rating: cathartic as a juice detox supplied by Juice Drinkers (or own production)

This concludes my list, but what would be a meal without a dessert? So let me share with you just two more items which for formal reasons could not be put above:

This is really the end of the list. I could only select 10 movies and not one more, which may have resulted in absence of several important titles. Let us know in the comments, what other movies about food would be put in your rankings!

THIS IS THE FIRST ARTICLE CREATED BY OUR FRIENDS, FOLLOWERS – THE TRUE COMPANIONS OF OUR CULINARY TRAVELS. SAY HELLO TO STACHU OCENIA RZECZY – OUR FIRST AUTHOR! IF YOU LIKE THIS TEXT, SHARE IT! THANKS!

iThere are no comments

Begin typing your search above and press return to search. Press Esc to cancel.